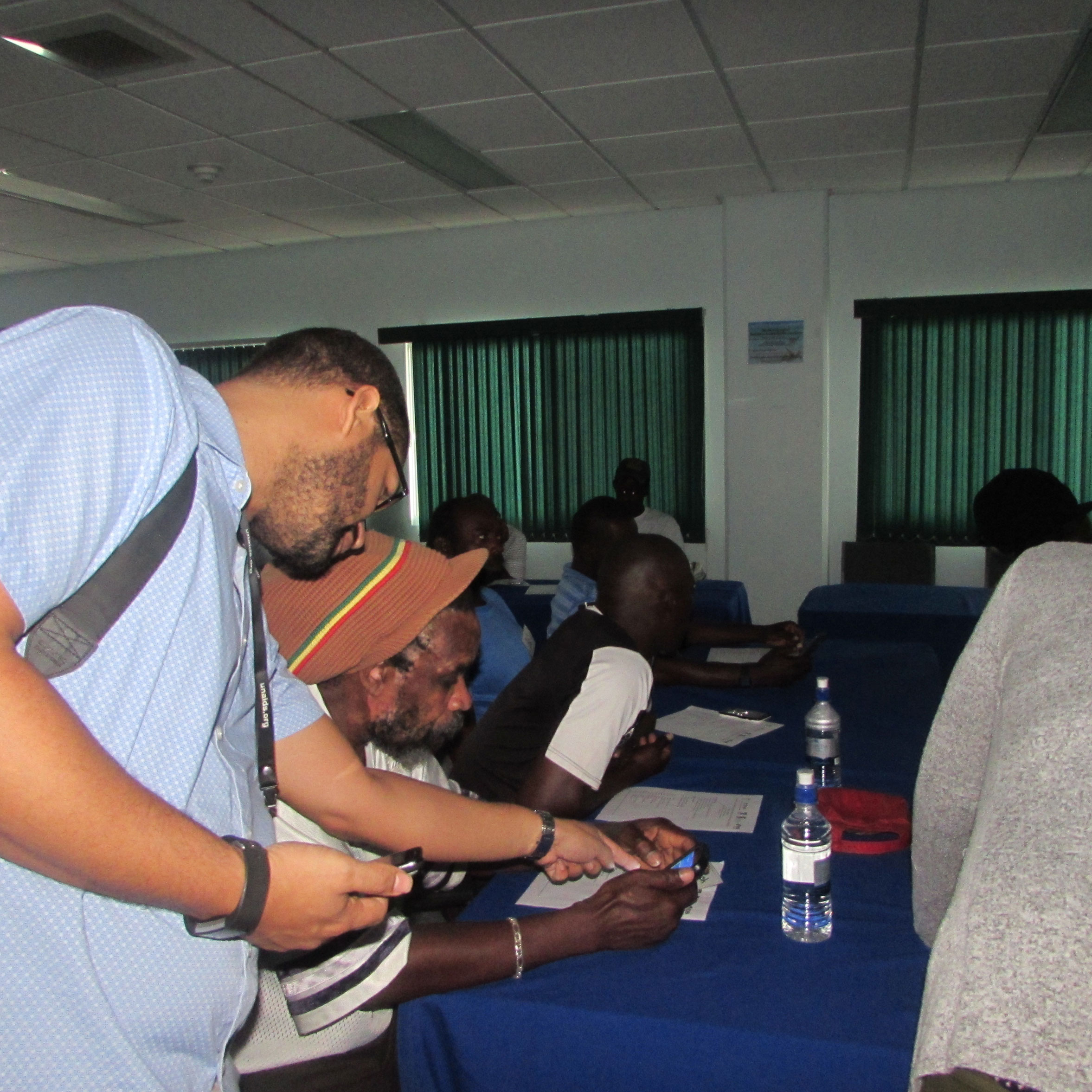 Using an application for mobile phones, fishers are able to receive early warnings of risky weather and sea conditions and are able to share their information about local conditions and missing persons under FEWER. Besides training in the use of FEWER, participants also received valuable tips about caring for and using their phones.

“This workshop gave good information and the app is good because it helps pass on information easier to fishers, especially since a lot of persons go to sea and don’t take the time check on information about the weather conditions,” says Raoul Lewis, a fisherman based in Colloquia, St Vincent.

The ICT-based early warning system is expected to reduce fisher folks’ vulnerability to the impacts of climate change. FEWER has been developed under the Regional Track of the Pilot Programme for Climate Resilience (PPCR) in the Caribbean, with co-implementer the Caribbean Regional Fisheries Mechanism (CRFM).  The programme is funded by the Climate Investment Funds through the Inter-American Development Bank (IDB).

Product developers, ICT4Fisheries Consortium, were on hand to explain the system and take feedback from the future users. The St Vincent workshop followed similar activities held in St Lucia and Grenada since the start of this year, as the FEWER is set to be rolled out in four PPCR countries in the Eastern Caribbean  – St Vincent and the Grenadines, St Lucia, Grenada, and Dominica.

Kevon Andrews of ICT4Fisheries explains that the workshop was useful not only to the fishers but also to the product developers. While the process of developing FEWER included consultation with fishers, the workshops provided additional information which can be incorporated into the system.  He adds that the FEWER training has also provided other new information to many fishers.

“For example in Grenada, the fishers did not know there was a toll-free number for the Coast Guard and so we were able to share that with them. What they used to do was call the police emergency number and the police would then contact the Coast Guard. We also showed them how they can add a personal contact to the list of Emergency Numbers you can call toll free and they found that useful.”

There are plans to integrate FEWER into existing national disaster risk management and emergency response frameworks and, as such, the fishers workshop was preceded by a one day administrators workshop in St Vincent with representatives from relevant organizations including the coast guards, national emergency management organizations, meteorological services, fisheries departments and fishers organizations from St Vincent, St Lucia, and Dominica. Regional organizations including the CRFM, Caribbean Disaster Emergency Management Agency (CDEMA) and the Caribbean Institute for Meteorology and Hydrology (CIMH) were also present at the March 7 session which introduced FEWER to the agencies that will support its mainstreaming and administration in-country and regionally.

For Raoul Lewis, the workshop was a good start and he feels that successful use of FEWER needs support and follows up with the fishers from these agencies: “This training went well and the trainers explained it well. If Fisheries (Division) could have more sessions from now on to refresh the information that would be good. You know, we need reminding, otherwise, things will just get back to what it was. We need more training and more reminders.”

Anaitee Mills, a project manager at the Climate Change Division of the IDB, says the development of the early warning system under the PPCR demonstrates that the Caribbean has the innovation needed to help the region build climate resilience.

The Pilot Programme for Climate Resilience (PPCR) in the Caribbean consists of individual country pilots/projects in six vulnerable countries (Dominica, Grenada, Haiti, Jamaica, St Lucia and St Vincent and the Grenadines), and a Regional Track of activities which supports and is supported by the national projects. The Regional Track is coordinated by the Mona Office for Research and Innovation at the University of the West Indies (UWI MORI) and is working to build the region’s resilience to climate change and climate variability through work in research, policy and applied climate change adaptation activities country and community levels.